Educated in Hanover, Berlin and London, pianist Paul Cibis has performed on five continents and established an international presence. He has played solo and duo recitals at festivals in his native Germany, France, the UK, the US, South Africa, Australia and New Zealand and appeared in the electronic media around the world, including the BBC, WDR, 3Sat, ORB, HR, RTHK and CCTV.

Following his interest in presenting classical music in unique and innovative ways, Paul has created the PIANO BATTLE. concert brand which he has co-developed with fellow pianist Andreas Kern. Their celebrated shows have been performed in Europe, Asia and the US. Its success has led to further invitations to major venues and festivals in China, Taiwan, South Korea, Italy, Germany and the US, including the Beethovenfest Bonn, Schleswig-Holstein Musik Festival, Klavierfestival Ruhr, Rheingau Musik Festival, the Prinzregententheater Munich, Berlin Philharmonie, Seoul Arts Center or National Concert Hall Taipei.

Paul has also been involved in various film projects. He penned the music scores for several short films, and was the initiator and music supervisor of the international award-winning documentary PIANOMANIA.

His CD recordings include an album of French mélodies and piano works by Berlioz, Fauré and Debussy, with German mezzo-soprano Barbara Senator. His latest album features a collection of solo pieces by Taiwanese composer Kai-nan Huang.

As an educator Paul Cibis has been teaching in master classes and workshops for pianists in Germany, UK, US, China, Hong Kong, Taiwan and South Korea. He is the co-director of the annual Oxford Piano School summer course, and a founding member and current chairman of the international Peter Feuchtwanger Society.

From 2005 to 2009, Paul was a vocal coach at Trinity Laban Conservatoire of Music & Dance in London. He conducted piano and Lieder workshops at music academies in Hong Kong and Guangzhou, China. He was also an adjudicator at the Hong Kong Music & Speech Festival Competition in 2014 and 2019. 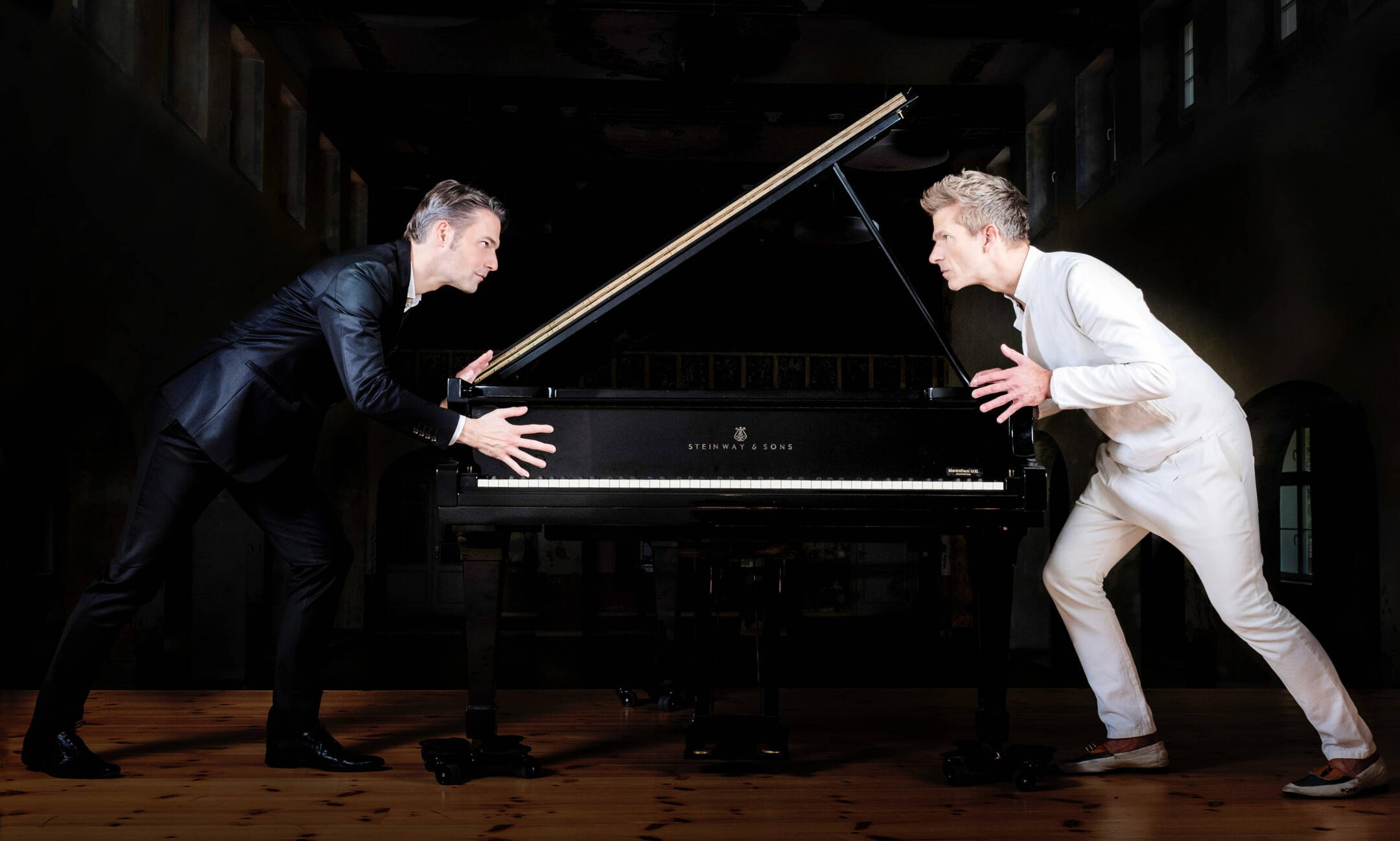 "As the competition got white-hot, the performers and the audience found themselves unable to sit back down… as the crowd looked on, nervous and excited, immersed in the beauty and tension of the music … And when the smoke clears, the only thing that’s been defeated is the barrier between classical music and the audience."
(map Magazine, China)

"The Piano Battle between the two men facing each other at the grand pianos is a publicly staged and artfully performed contemplation of the classical concert business as well as classical music itself. Andreas Kern and Paul Cibis purposefully present their expertly executed craft in the wrong – an athletic - context and let the unique qualities of their performance shine even brighter this way. Between the comedic remarks and over the course of a lovely Schubert Impromptu and a biting Ligeti piece, they compel the audience to engage in the focused mindfulness that is necessary to truly appreciate music."
(Berliner Morgenpost, Germany)

Originally created for the Hong Kong City Festival, PIANO BATTLE has been performed for sold-out audiences in Europe, the United States and Asia – including the Shanghai Oriental Arts Center, Seoul Arts Center and an open air spectacle before 6,000 fans in Taiwan. The show has also been well-received in the pianists‘ home country where Andreas Kern and Paul Cibis have performed for enthusiastic audiences in concert halls and at festivals all over Germany – including the Beethovenfest Bonn, Rheingau Musik Festival, Schleswig-Holstein Musik Festival, the Prinzregententheater Munich and the Philharmonie Berlin.

Andreas Kern and Paul Cibis have expanded their concept – in 2016 with the premiere of their show sequel PIANO BATTLE – Ready for Fame, and in 2017 with their latest creation PIANO BATTLE meets ORCHESTRA. 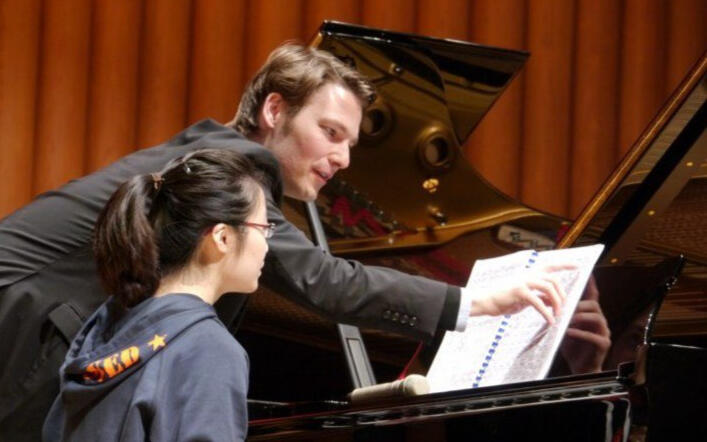 Education is one the most rewarding activities one can engage in as a musician. I was fortunate to start my path as an assistant of Prof Peter Feuchtwanger, who mentored many of the world's leading concert pianists.

One of my long-term passion has always been the research on healthy piano techniques that prevent and successfully treat any playing-related injuries such as tendonitis, exostosis and focal dystonia etc. In London, I assisted Prof Feuchtwanger at several master classes and workshops for the International Society for Study of Tension in Performance (ISSTIP) and the European Piano Teachers Association (EPTA) in London.

Today, I am one of the founding members and current chairman of the international PETER FEUCHTWANGER SOCIETY. The society supports musicological and pedagogical research projects through the annual Feuchtwanger Piano Symposium and the establishment of a Peter Feuchtwanger Archive.

Whenever my performing schedule allows, I am keen to meet the next generation of musicians. Over the years, I have been invited to conduct master classes and workshops for pianists in Germany, UK, US, China, Hong Kong, Taiwan and South Korea (Hong Kong Academy for Performing Arts, Shanghai Normal University, Xinghai Conservatory of Music Guangzhou, China, Yamaha Centre Taichung, Taiwan, and Keongnam Arts High School Jinju, South Korea).

In 2016, together with my colleague Pavel Timofeyevsky, I founded the Oxford Piano School, an annual piano course held in conjunction with the Oxford Cello School’s summer festival in Oxford, UK. From 2021 onward, this summer course extends and continues as the PHILOMEL MUSIC ACADEMY, now taking place at Harrow School, London.

The international award-winning documentary PIANOMANIA (2009), is the culmination of another musical project that I am proud to have initiated. Based on the eclectic character of Steinway technician Stefan Knüpfer who was an old acquaintance of mine, my brother film-maker Robert Cibis produced a film about Knüpfer's life and work with various pianist personalities. I was also the music supervisor during its filming and post production period. 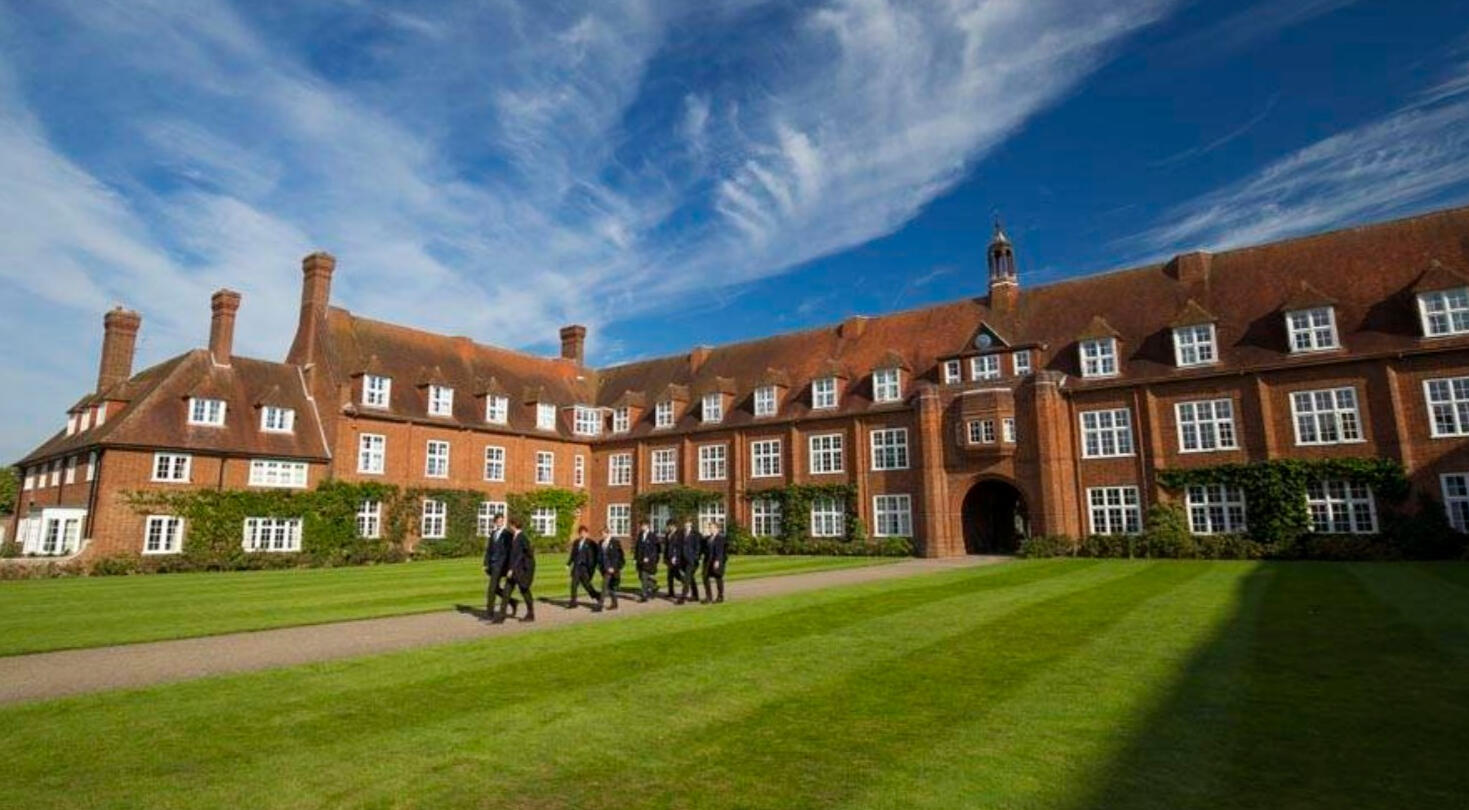 Much more than just an ordinary week of piano masterclasses; the Oxford Piano School (OPS) gives its participants a unique opportunity to immerse themselves, head to toe, into a week of wide ranging musical activities and experiences.

The society aims at disseminating the instrumental pedagogical concept of pianist and pedagogue Peter Feuchtwanger, and promoting its further development. 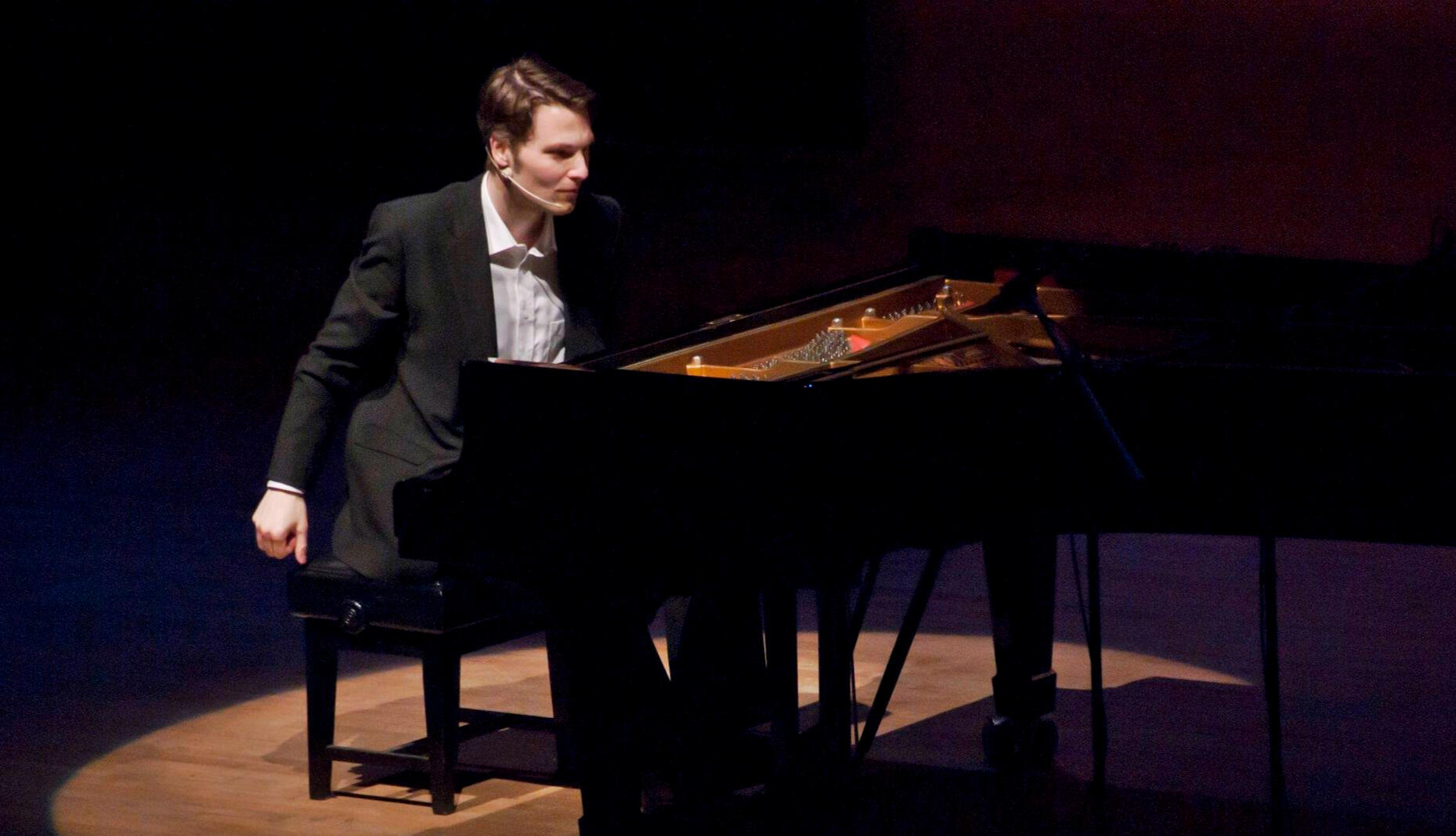 Since 1998: Solo and duo recitals at festivals in his native Germany, France, the UK, the US, South Africa, Australia and New ZealandSince 2000: Radio & TV performances for various media stations around the world, including the BBC, WDR, 3Sat, ORB, HR, RTHK and CCTVSince 2012: Co-Creator of the PIANO BATTLE concert brand. Performances at venues & festivals in Europe, Asia and the US including the Beethovenfest Bonn, Schleswig-Holstein Musik Festival, Klavierfestival Ruhr, Rheingau Musik Festival, the Prinzregententheater Munich, Berlin Philharmonie, Seoul Arts Center or National Concert Hall Taipei.

1. Content
The author reserves the right not to be responsible for the topicality, correctness, completeness or quality of the information provided. Liability claims regarding damage caused by the use of any information provided, including any kind of information which is incomplete or incorrect, will therefore be rejected. All offers are not-binding and without obligation. Parts of the pages or the complete publication including all offers and information might be extended, changed or partly or completely deleted by the author without separate announcement.

2. Referrals and links
The author is not responsible for any contents linked or referred to from his pages – unless he has full knowledge of illegal contents and would be able to prevent the visitors of his site from viewing those pages. If any damage occurs by the use of information presented there, only the author of the respective pages might be liable, not the one who has linked to these pages. Furthermore the author is not liable for any postings or messages published by users of discussion boards, guestbooks or mailinglists provided on his page.

3. Copyright
The author intended not to use any copyrighted material for the publication or, if not possible, to indicate the copyright of the respective object. The copyright for any material created by the author is reserved. Any duplication or use of objects such as diagrams, sounds or texts in other electronic or printed publications is not permitted without the author’s agreement.

4. Privacy policy
If the opportunity for the input of personal or business data (email addresses, name, addresses) is given, the input of these data takes place voluntarily. The use and payment of all offered services are permitted – if and so far technically possible and reasonable – without specification of any personal data or under specification of anonymized data or an alias. The use of published postal addresses, telephone or fax numbers and email addresses for marketing purposes is prohibited, offenders sending unwanted spam messages will be punished.

5. Legal validity of this disclaimer
This disclaimer is to be regarded as part of the internet publication which you were referred from. If sections or individual terms of this statement are not legal or correct, the content or validity of the other parts remain uninfluenced by this fact.

Thank you for visiting my website. Do get in touch via the email form below, I will get back to you very soon.

Feel free to also connect with me on the following platforms:

I will respond to your message as soon as possible.